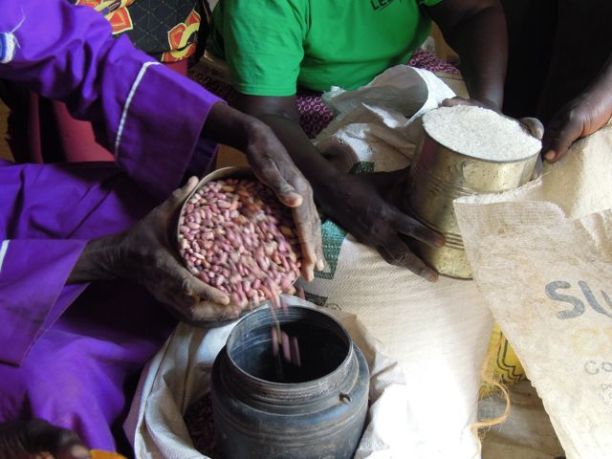 You give them something to eat!

That’s what Jesus told his disciples. Maybe some 10-15,000 thousand people, tired and hungry, flocked around Jesus. Loki has  been, until recently, a place of acute hunger for months because of extended heat and drought – and for some it became their last hunger!  We didn’t have five loafes and two fishes but rather a number of wonderful friends both in Sweden and France who willingly headed our call for help!
We have made 5 distributions through our local partner LEDO, where more than 3000 households i 8 different locations have received and extra food ratio. So even here somewhere between 10-15,000 people have been touched. And those who were able have put in efforts of cleaning their villages, hauled stones and filling material to improve walkways etc. and helped doing other valuable work in the community. 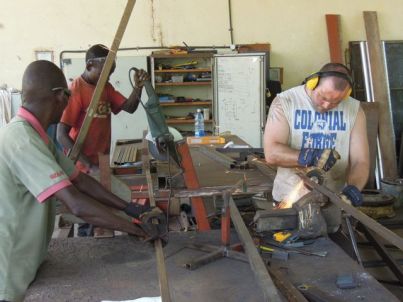 Can you believe that a young man in the best of his years is willing to sweat and suffer with us for two months giving a hand where it’s best needed and even using his own means to travel out and cater for all his costs. Simeon hadn’t used a grinder/cutter before coming out, but he soon mastered the art of making straight cuts of the material to all our roof steel and much more. Jonas and I were welding the steel trusses together and then it was time to hoist these 12-meter assemblies over the assembly hall at the school. 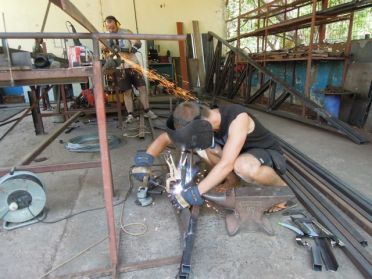 A new standard for schools in Turkana? 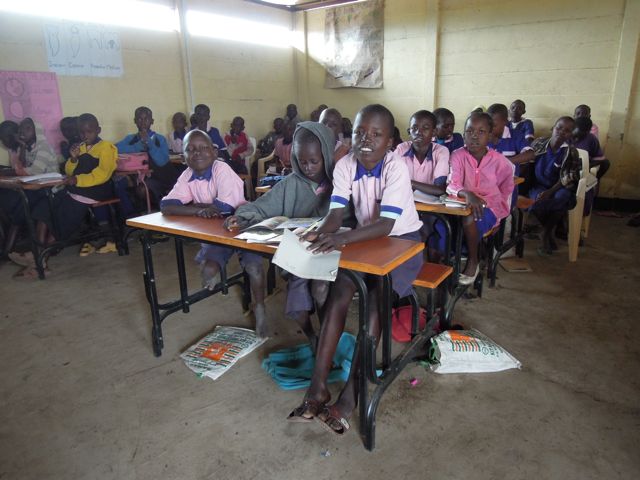 In our workshop we also manufacture school desks which I have designed and we call them the LokiKeA-desk (because they can be sent in a flat pack and assembled on the spot, just like any IKEA furniture).
The new Director of Early Child Development in Turkana exclaimed when he saw them:
– I want every one of our schools to have these desks!
So there is very likely a market for these desks!

And my son! How about him? 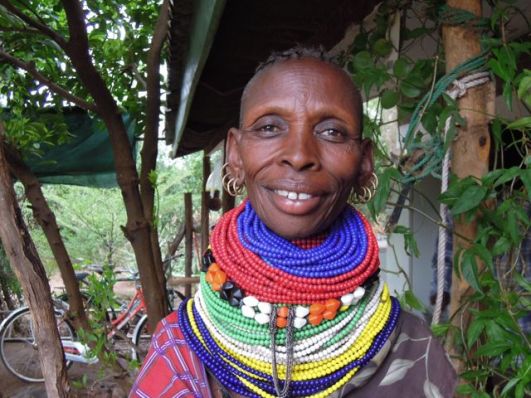 How about my son?

The other Friday we had another one of these ”mamas” come with her son asking for help and being very eager to see her son being able to pursue his secondary education. Sometimes there is a little bit of help from some politician or some odd organisation. The student will then travel to enroll at a boarding school. But far too often the poor fellow will discover that the money was only enough for the first term. And then he is sent home because he can’t pay. We have about 30 students today in our support program and thanks to supporters from Sweden we’re able to promise them to see them through the full four years of secondary education. We also support some few who are in college. 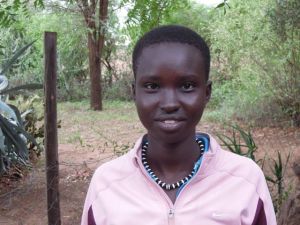 Caro – ready to return to school

One of these students is Caro, who was sent home last year. Her father is in prison since 5 years. Her mother is sickly and admitted to a clinic for treatment of her severe tuberculosis. Caro’s older sister died recently due to AIDS…!

The Mapendo Student Support project now gives her some hope for the future. 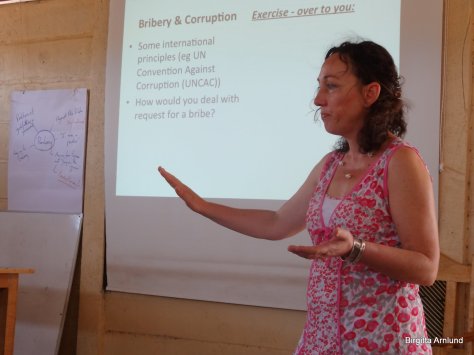 Andrea and Richard Gleed arrived all the way from England in order to share their knowledge and experience in the areas of leadership and business. Some 25 participants from different sectors of the society, including our co-workers in LEDO and ANA benefitted from the training. 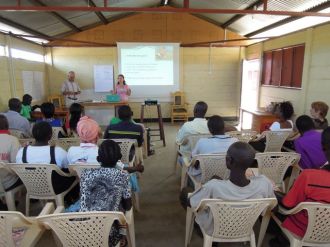 Richard and Andrea with eager students

Birgitta – Coaching in Leadership and Computer 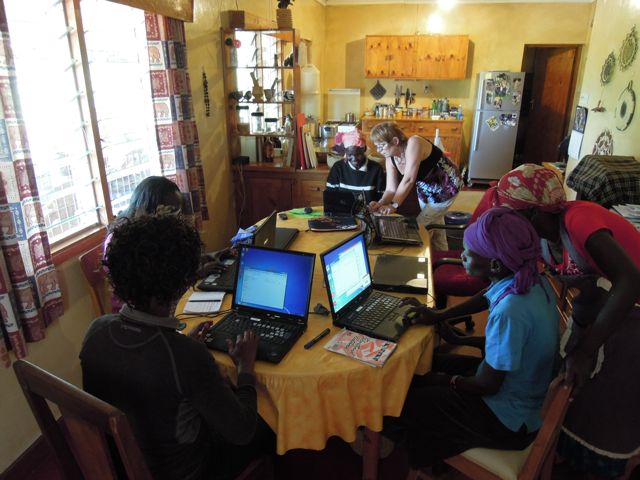 ANA women’s weekly management and computer training in our home.

Birgitta has been training her project managers on a weekly basis in leadership and computer skills. And it has not been the easiest of tasks for some of the women to grasp the ideas of e-mail addresses, passwords, formatting etc, having had no earlier exposure to computers. But now they have started mastering simple Word-documenets, XL-spreadsheets, e-mailing and even a little more for some! 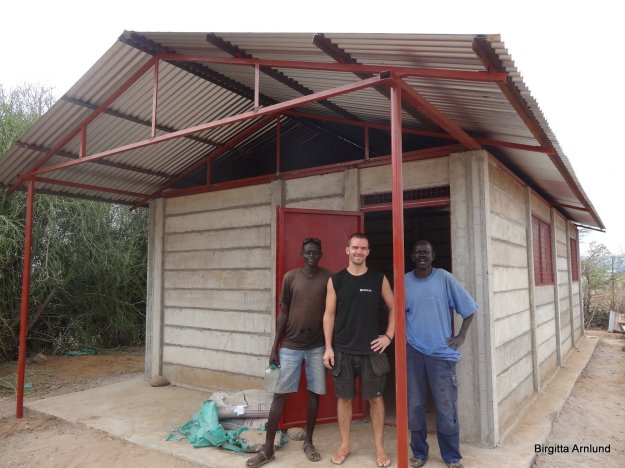 The Dental Clinic nearing its completion

That’s the name of one of the larger Evangelical Churches in Kenya. The bishop of the North Western district of Turkana, Titus Itao, is our neighbor on the compound. Under the AIC there are several ministries including schools (which are run by the government though), clinics, a local radiostation called Biblia Husema Broadcasting etc. Just the other day I had a chance to share with the bishop how we also have been involved in supporting a number of their projects. And we were actually surprised ourselves when realizing what support has been channeled through our hands over these 5 years, for solar panels and IT-equipment, water tower and supply lines, electricity connections, a new submersible water pump, the building of a small dental clinic etc. So far we have accounted for roughly 15,000 USD worth of support. In addition we have referred a great number of sick and vulnerable to the AIC clinic for treatment and w’ve been able to pay their bill thanks to faithful support from friends in Sweden. 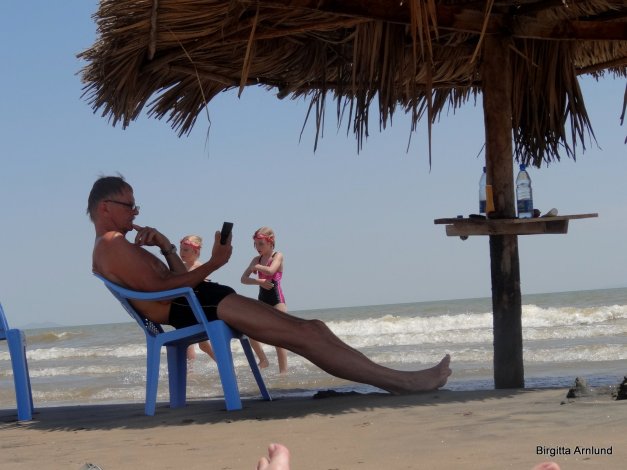 Relaxing by the lake

That’s another name for Lake Turkana, because of the reflected color of the water, similar to that of a jade gem. About the jade and nefrit is said that it’s a tough and durable stone, suitable for intricate and detailed sculptures.

One good weekend we traveled to Lake Turkana together with our son Jonas with his wife Emma and their children Hugo, Bennine and Li. The trip started well with one night in Lodwar followed by a 24 hour beautiful visit by the lake with swimming, basking in the sun, eating and relaxing.

However the return trip wasn’t quite as good. It started with Bennine Hugo getting sick, then my tommy running plus the car’s cooling system overheating. The compilation of these complications caused an extra night at Lodwar. The following day we managed with slow careful drivning and frequent replenishments of water in the radiator to return back to Loki! We got home safely and the car was handed over to our mechanic for a major intervention (cylinder head being warped…!) 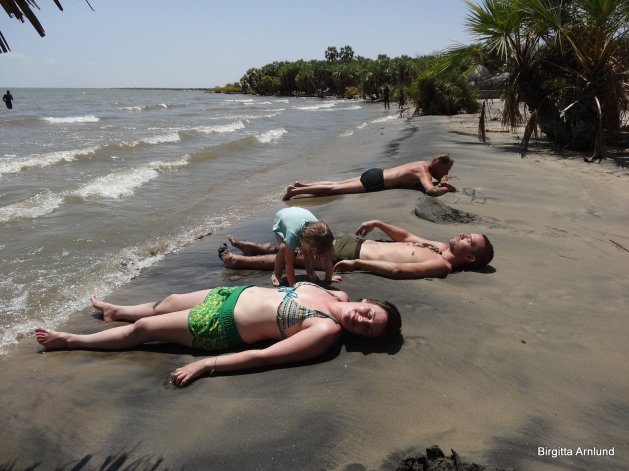 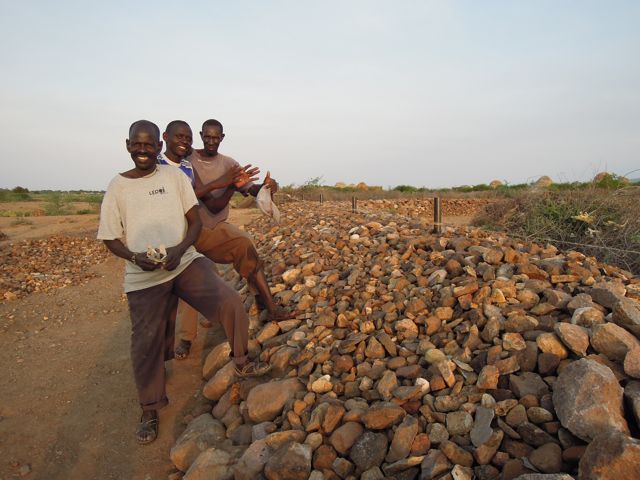 My men at the gabion wall!

Here is where rock upon rock is placed in order to halt the erosion around the school in times of heavy rains. My men are working hard to get it up to height and width. With the gabion wall in place, the soil will gradually get more fertile for planting of more trees and other useful plants around the school. A very interesting project! 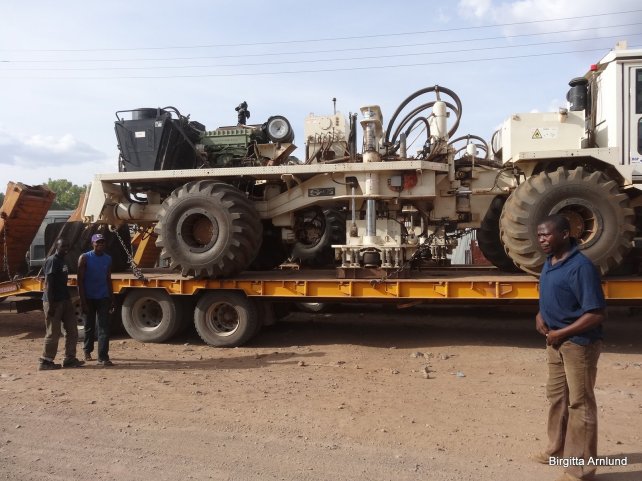 One of several seicmic pounders on the way to the testing sites.

Following last years areal surveys, the Spanish Oil Company , SEPCA, is now in full swing with ”seismic testing” in several areas near to Loki in order to determine whether there is a viable petroleum table underneath the surface. Expectations are of course high and the presence of the company has also provided some work opportunities for locals.

They even managed to pull our School Principle away to greener pastures! He left from one day to the next. All this adds extra challenges to run the school. In order to be competitive and to be able to keep our trained teachers we have to find a good number of sponsors for the children.

Maybe you’d be one of them! Sponsoring a child is 15 USD / month. Don’t hesitate to contact us!

Thanks for standing with us!

More pictures from days in Loki 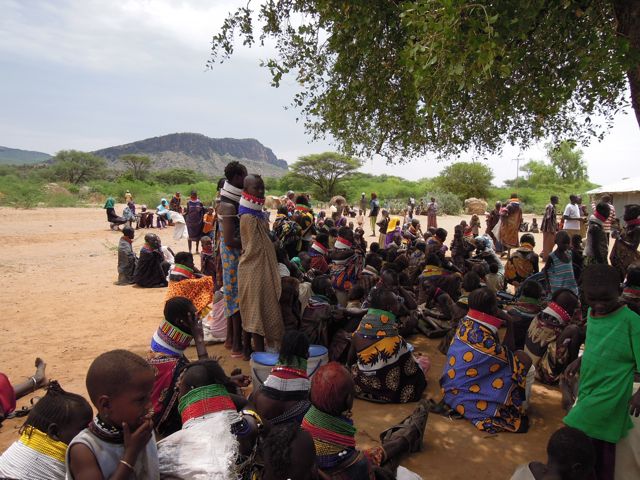 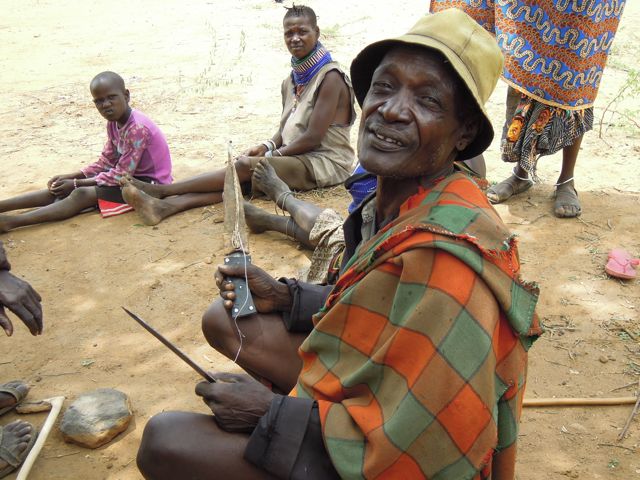 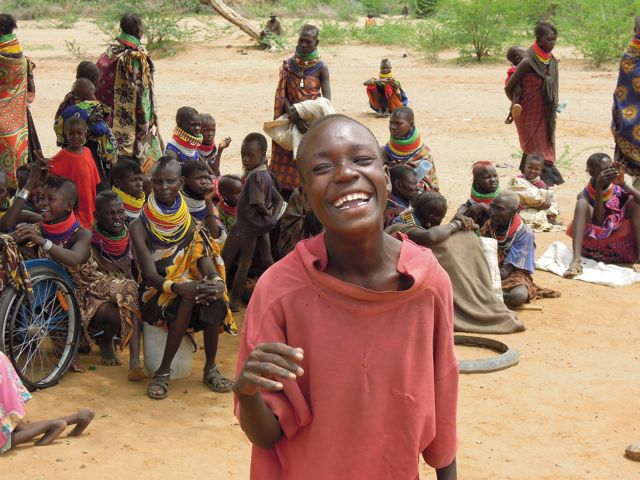 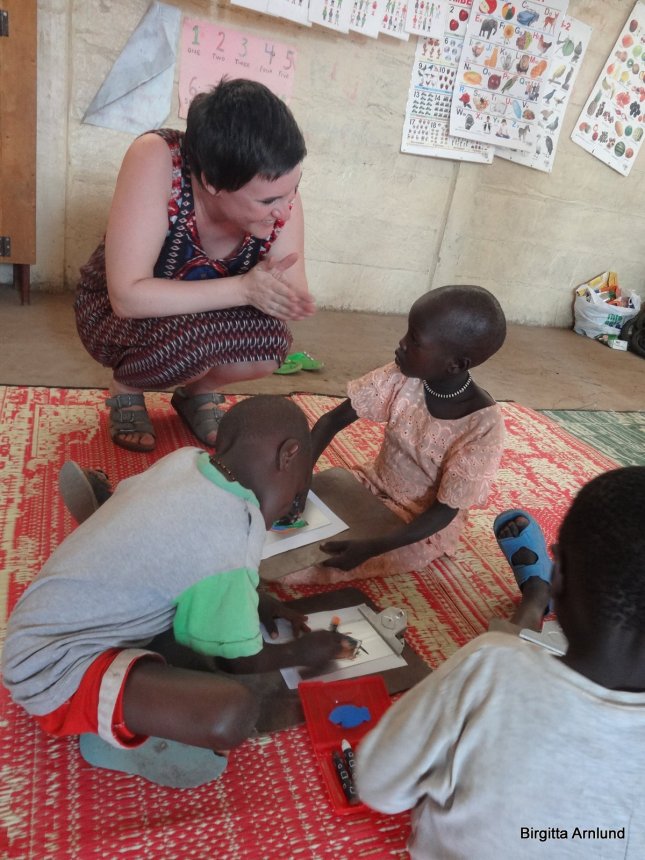 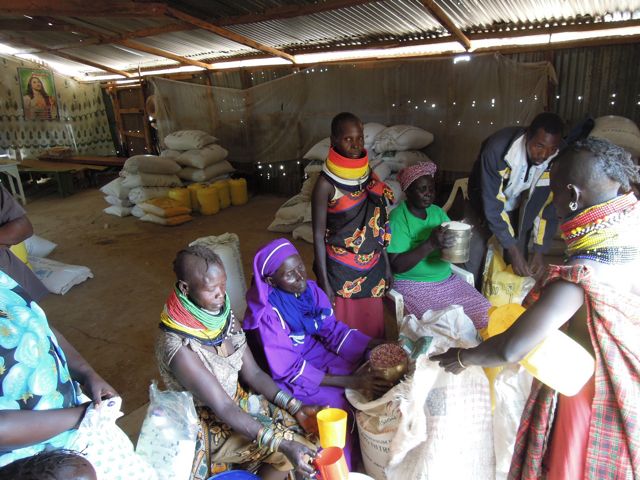 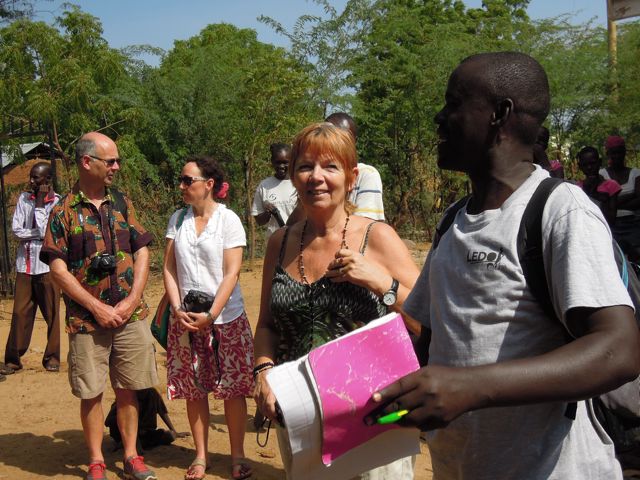 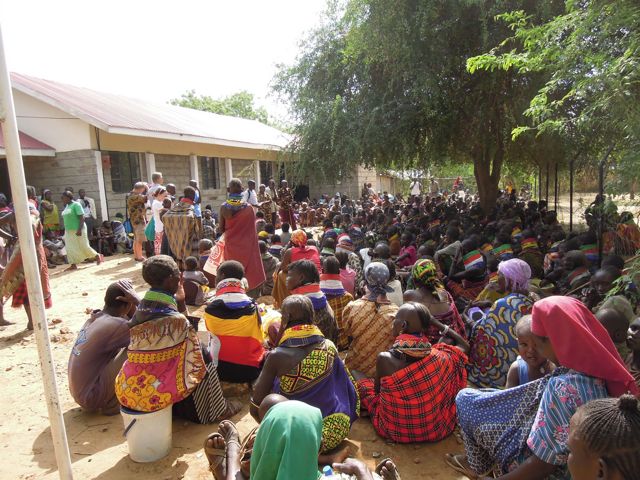 Patiently waiting in the hot son for the distribution to start 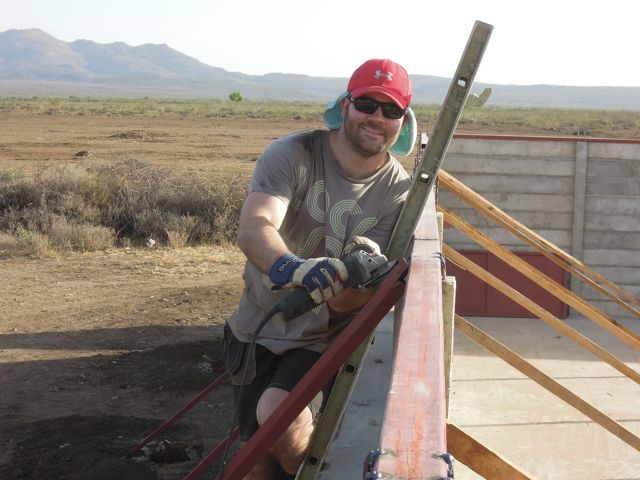 Simeon by the assembly hall construction 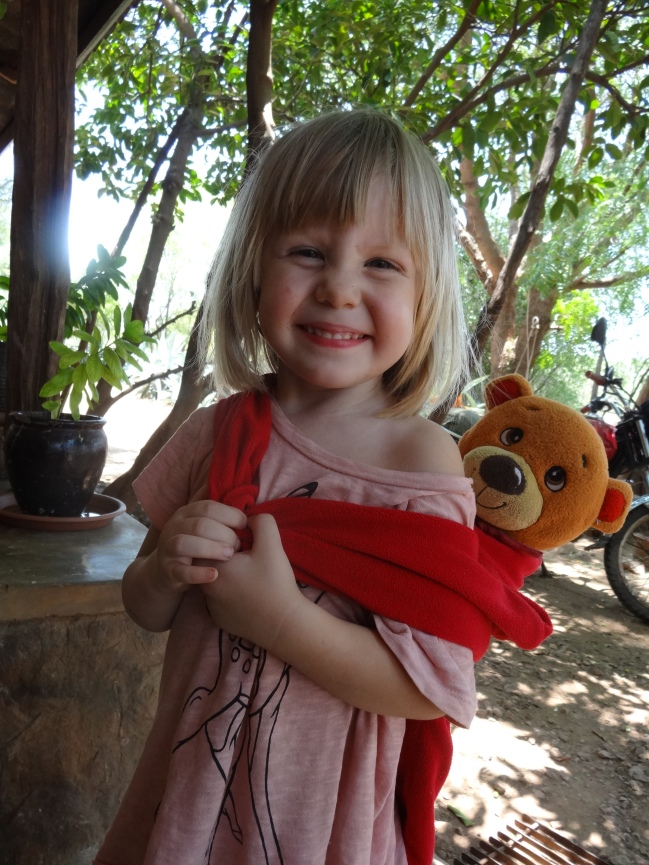 Li, our grandchild who was such a blessing over the three months. 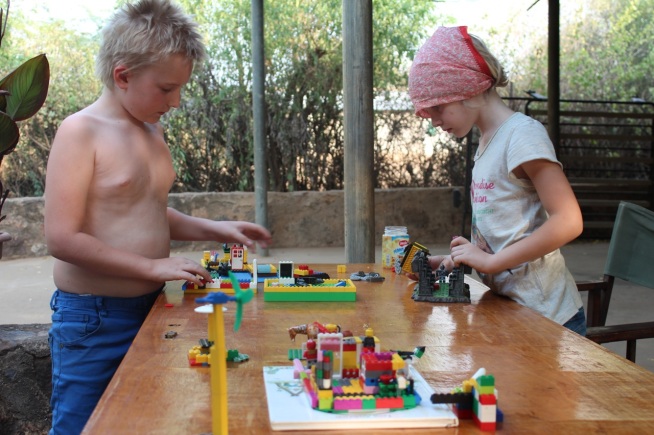 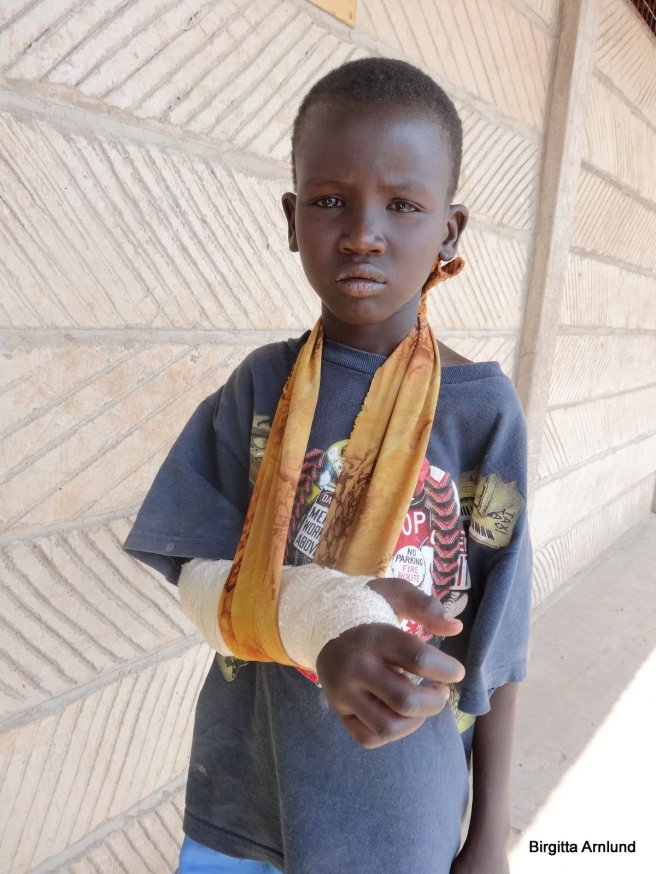 Little Dennis Apolo busted his arm during a outdoor day. We had to send him to Kakuma, some 90 km away in order to get i properly plastered. 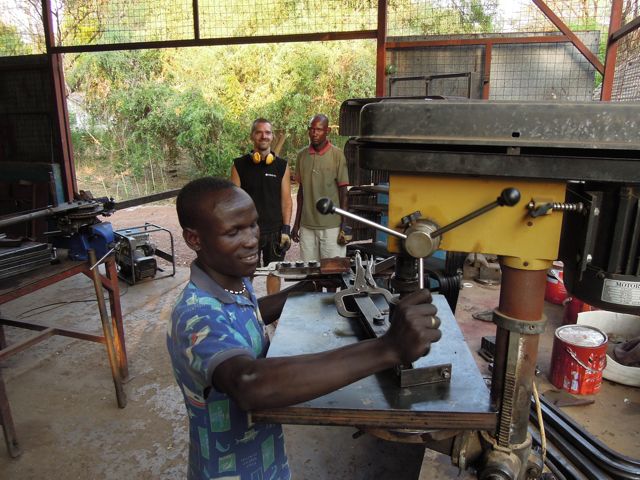 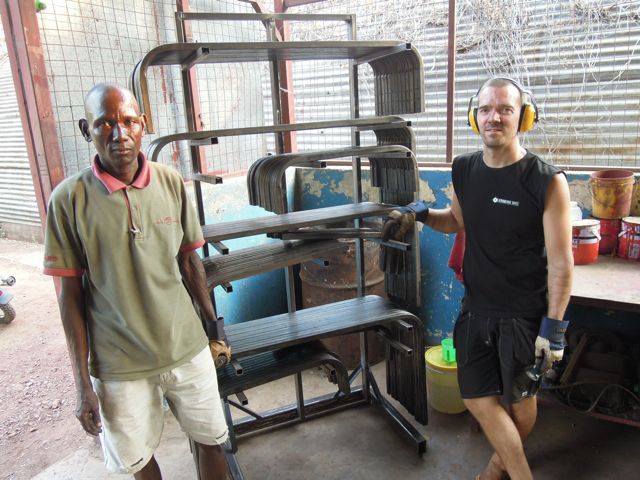 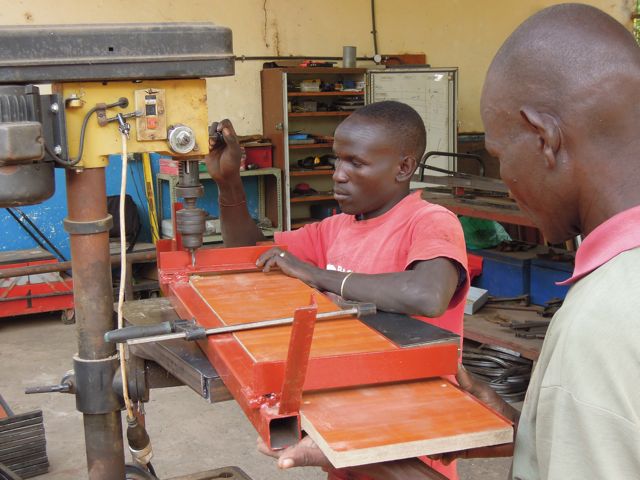 Drilling of seats and table boards 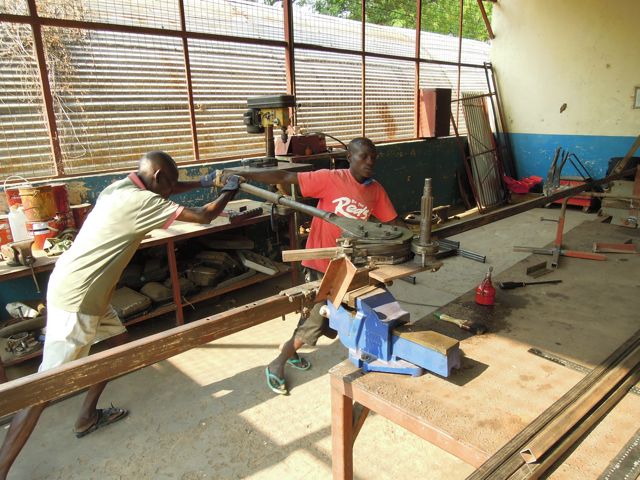 Bending the square tubing with my manual bending tool – made from old vehicle parts and other scrap! 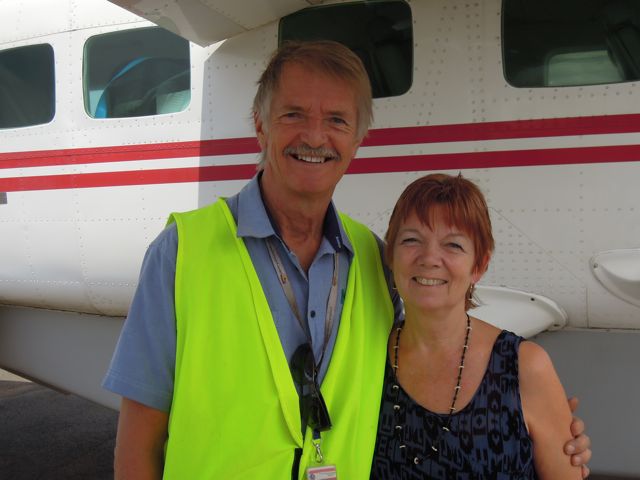 This is us! Love to you all!